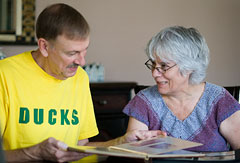 “I gained a lot of confidence at the university.” —Jim Anderson

Jim Anderson was sitting with his legs dangling out the window of his room at the College Inn when he first caught sight of his future wife Donna in the parking lot six floors below. A conversation the next day led to marriage in less than three months.

Forty-two years later, Jim feels that almost everything in his life has flowed from the University of Oregon, from the ability to think independently to his career and family.

“My wife would never have been at the UO if they hadn’t offered her a graduate teaching fellowship in French,” said Jim, a native Oregonian now living in a Texas fifty-five-plus community. His own UO scholarship—coupled with summer jobs in a plywood mill—enabled him to earn a history degree in 1969. The following year he finished a master’s degree in general social science.

Now the Andersons have arranged to support several scholarships for PathwayOregon students and for students with majors in the College of Arts and Sciences through a gift from their estate.

Raised by a single mother struggling to get by, Jim lived all over western Oregon. He attended eighteen schools between first grade and graduation from Medford High. If not for a counselor at Tillamook High, who took the initiative to apply for a UO scholarship on his behalf, Jim could not have attended college. That’s why he feels so strongly about helping others.

“I was in shock that I got a scholarship,” Jim said. “I was extremely shy. I gained a lot of confidence at the university. It’s so rewarding to know that with our help, students will graduate and get opportunities they would never have had otherwise.” 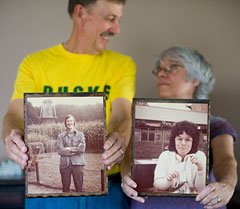 In 1970, when the Andersons finished graduate programs at the UO, Eugene’s unemployment rate shot up to about 26 percent.

“We decided if we were ever going to make progress, we had to leave Eugene,” Jim recalled.

Since Donna had family in New York City, they decided to try their luck there. Jim caught a break with an entry-level position at KLM, a major airline. He went on to a long, successful career in marketing and sales.

“You were tested on your knowledge of geography and all kinds of things,” he said. “I wouldn’t have gotten that first job without the degree.”

Donna started as an administrative assistant at the Institute of International Education and later, having moved on to other firms, became a paralegal and eventually an attorney following law school.

“She originally was hired because they wanted someone who had traveled a bit and spoke a second language,” Jim said. “It’s funny how sometimes you’ll start someplace and you have no idea where the trail is going to lead.”

Both are thankful to be in the position to help students.

“PathwayOregon appealed to me because it’s kids who are in the situation that I was in,” Jim explained. “They may have no way to afford to go to college without support from someone.”

“The fact they have academic counselors available for these kids is very important,” he added. “I wish I’d had that. The only feedback we got about the direction we were taking in life was pretty much through our friends.”