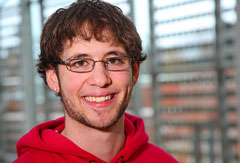 “Scholarships each year have kept me going.”

Evan Baechler describes his UO experience as “world class in every respect,” from an eleven-country European tour last summer that grew out of his study-abroad program to a rare internship at Nike world headquarters this summer.

Best of all, the internship has resulted in an offer from Nike for what he describes as his dream job, to start after he graduates next spring.

The Portland native is a prime example of how donor-funded scholarships help keep Oregon’s most promising students in state.

Baechler, a Robert D. Clark Honors College student majoring in sports marketing in the Lundquist College of Business, was selected to study international business and French at the prestigious Esdes School of Management in Lyon, France, during the summer of 2010.

Now a senior, Baechler spent much of this year as one of four digital brand marketing interns handpicked by Nike from selected universities across the nation.

Baechler is grateful that he’ll graduate debt-free thanks to part-time jobs and three important UO scholarships — a Thomas Wrightson Scholarship, an F. Burr Abner Scholarship, and a Dean’s Scholarship. The first two are funded by endowments established with estate gifts.

“A lot of things attracted me to the UO but it was ultimately a Dean’s Scholarship that brought me here,” he says. “The additional scholarships, which have been renewed each year, have kept me going.”