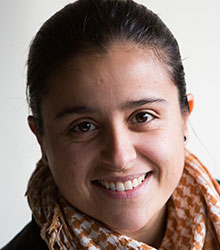 Iraq veteran Paula Barreto takes nothing for granted about the scholarships helping her achieve a long-delayed dream.

Her story begins at age three when she moved with her mother from Bogotá, Colombia, to upstate New York.

Quiet and serious, Paula knew her mother couldn’t afford to send her to college. She hoped good grades would help.

Unfortunately, lack of advice proved an even greater barrier than lack of financial means.

“When the time came to graduate high school, I had no idea that I could have qualified for financial help,” she remembers. “I slipped through the cracks of the educational system.”

Paula quickly found work as a school portrait photographer. Several months later, when a Navy recruiter called her home, she learned the GI Bill could help with college costs.

She capped a five-year Navy stint with an adrenalin-fueled deployment spent keeping Seahawk helicopters mission-ready for a special ops command at Balad Air Base in Iraq.

While there, Paula saved hard for college. She resolved to pursue studies that could allow her to make a difference in two areas: social justice and the environment.

After hearing so much about Oregon from Navy friends, she moved to Portland and enrolled at a community college.

Vocational programs for veterans helped her home in on landscape architecture as a career and the UO’s five-year program as the best fit.

In addition to a coveted Bernard Osher Reentry Scholarship, she received one of the most prestigious awards for UO students in her field, a scholarship funded through a bequest from the late Dorothy Martone, a 1934 landscape architecture graduate.

Yet even with scholarships, the GI bill, and some financial aid, she will still have debt.

“Scholarships have helped incredibly,” she said. “It’s money that I don’t have to borrow or take time away from school to earn.

“I’m grateful there are people out there willing and able to extend a hand and pull people up so they can make something of themselves.”