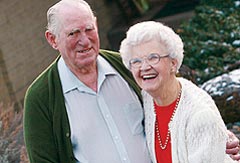 Patricia and Terrence Boyer say their return on gift annuities with the University of Oregon Foundation is better than when they had the money in stock.

When Patricia and Terrence Boyer learned they could increase their retirement income by making gifts to support the Charles H. Lundquist College of Business, they quickly established two charitable gift annuities with the University of Oregon Foundation.

“We receive more income now than when the money was invested in stock,” says Patricia, who earned her degree in business from the UO in 1945.

She says her professors helped launch her career by recommending her for an accounting job in Southern Oregon, where she later met and married Terrence. They have cofounded and managed several successful ventures.

The Boyers attached no strings to their gifts, leaving decisions about their use up to the discretion of the dean.

“We didn’t want to place any restrictions on them because we know the money will be used where the need is greatest,” Patricia says.