You Give to What You Love 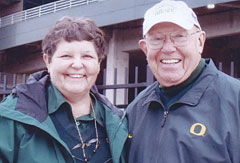 During their senior year, mutual friends introduced Ann and Fitz (both class of 1953) one evening at Max’s tavern. “We had lots to talk about,” Ann Brewer remembers. “It all just seemed to fall into place.”

Soon after graduation Fitz, a first lieutenant in the Army was dispatched to Germany. They married during a leave in 1954, and she joined him there.

When they returned to Oregon, he worked as a salesman for Crown Zellerbach, first in Portland and then in his hometown of Medford, where Ann still resides. Fitz was recruited by a brokerage firm and eventually went on to found a branch of the Portland-based Atkinson and Co. in Medford. In 1999 the firm became part of Umpqua Investments Inc.

The Brewers were among the first to buy season tickets to Autzen Stadium. “Back then, you had a whole section to yourself,” Ann laughs.

Good friend Tom Wrightson ’53 encouraged them to begin supporting the UO financially. Fitz joined the UO Foundation Board of Trustees and later served as president of the Alumni Association.

In 1985, Fitz founded an annual golf tournament to benefit the Oregon Club of Southern Oregon, which he also founded. Upon his death the tournament was renamed “The Fitz Brewer Duffin’ Fore the Ducks Tournament.” It funds an endowed scholarship that supports student athletes.”

“Another good friend and mentor told us, ‘you give to what you love,'” Ann says. “So whenever there was anything to give to, we said yes. And it just kind of multiplied.”

Before Fitz died, the couple donated their Sunriver home to the university via a charitable remainder trust. Ann will receive income from the trust for the rest of her life and the remainder will provide ongoing support to the UO Athletic Department, the Ford Alumni Center, and the Jordan Schnitzer Museum of Art. 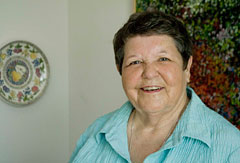 Ann, who recently turned eighty, shows no signs of slowing down.

A volunteer at Rogue Valley Medical Center for more than twenty-five years, she now remains active with the Hillcrest Society in Medford, which supports cancer research.

“Eighty is nothing these days,” she says. “It’s the new sixty.”

Describing her husband, she says: “Enthusiastic. Friendly. Outgoing. Generous. He was that way his entire life. And he loved his family.”