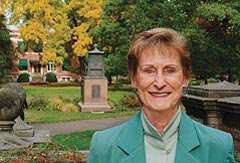 After her husband died, Dorothy Goode needed to change her financial strategy in order to maintain her income level. The solution: a charitable remainder unitrust.

More than half of today’s students are working their way through college.

Dorothy Goode ’77, M.P.A. ’84, says she identifies with them because it took her ten years to finish bachelor’s and master’s degrees, taking one course per term, while working full time at the University of Oregon.

That’s why she and her late husband Lee decided use part of their estate to create UO scholarships.

Dorothy met history student Lee Goode on a blind date in Klamath Falls one summer while he was home from college. They married following his graduation from the UO in 1954 and settled in Eugene.

Lee taught U.S. and A.P. modern European history at local high schools for more than thirty years, ending his career as the social science chair at Churchill High School. Dorothy retired as UO associate director of human resources after thirty-four years of service at the university.

The couple shared many passions, from fly-fishing and gourmet cooking to their devotion to the UO. They became members of the Arnold Bennett Hall Society, which recognizes those who make bequests to the university through wills or trusts.

After Lee died in 2005, Dorothy learned that her financial strategy would have to change in order to maintain her income at the same level as when he was alive.

With help from the UO Office of Gift Planning and her financial adviser, Dorothy set up a charitable remainder unitrust that is providing her with annual payments for life plus a sizable tax deduction.

“My income is back up where it needs to be,” Dorothy said. “After my lifetime, the principal will fund Lee and Dorothy Goode Scholarships. I am so grateful to the UO gift planning staff for making every aspect of this process so pleasant and satisfying.”