A Bequest for Scholar-Athletes 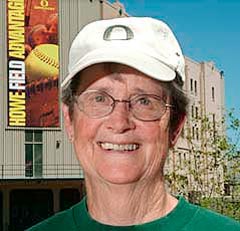 Jeannette Kimball’s tribute to her sister, Betty, is taking the form of a permanent endowment supporting scholarships.

When Jeannette Kimball first decided to establish a scholarship in her sister Betty’s name, she took a year-by-year approach through gifts to the Annual Fund.

“By testing the waters this way, I’ve been able to see firsthand what a difference this kind of award makes,” Jeannette says.

“I feel comfortable naming the university as the beneficiary of my individual retirement account so that an ongoing endowment will support Betty Joy Kimball Scholarships after I’m gone.”

Female athletes own the largest part of Jeannette’s heart because intercollegiate competition was unavailable to women back when she and her sister, Betty ’54, M.Ed. ’62, were working toward their bachelor’s degrees in education.

During more than thirty years apiece as high school teachers, the Kimballs helped open up new horizons for girls, both in sports and in academic areas traditionally dominated by males.

Betty, an avid softball player who taught physical education and health at Ashland High, became one of Oregon’s most influential high school coaches. The National Association for Girls and Women in Sports recognized the significance of Betty’s pioneering efforts with a Pathfinder Award in 1998.

Jeannette’s bequest will endow scholarships for outstanding softball and volleyball team members with an interest in education. “I’m delighted to honor my sister by supporting women athletes,” she says.