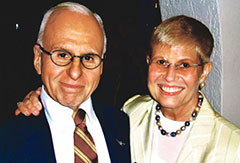 You’ve never seen her on camera, but the Emmys in Margaret (Margie) McBride Lehrman’s Washington, D.C. den — one for coverage of the death and funeral of Ronald Reagan and another for Election Night 2008 — hint at the impact of her thirtyyear career with NBC News.

Margie grew up in Madras, Oregon, thinking that newspapers were her calling.

She chose the UO for its journalism and psychology programs, but majored in English to hone her writing.

The decision paid off. Margie’s exceptional storytelling ability would propel her from “Today” researcher to Tim Russert’s deputy bureau chief and one of the industry’s most respected television news executives.

She planned and managed coverage of the most important happenings of our time, from Ford’s pardon of Nixon to Operation Desert Storm and Obama’s inauguration.

Along the way, she never forgot the smart kids she grew up with who couldn’t afford college.

“What a waste of talent,” she said. “I want kids to be able to have an education.”

Concerned about the decline in state funding, Margie made giving back to the university a top priority by serving as a UO Foundation trustee from 1990 to 2000.

She and her husband, Michael, also endowed a need-based fellowship for graduate students that emphasizes giving back through communication and writing.

Their gift has since allowed twelve students, at least one of whom is now a professor, to contribute in areas as diverse as conflict resolution, education, public policy, and creative writing.

“Every single one of them just blew me away,” Margie said.

Now the Lehrmans are increasing their support for UO students through a bequest.

Though Michael’s only Oregon connection is his wife (he graduated from Cornell and Harvard), he shares her passion for helping young people.

Michael’s career in military and civil aviation included flighttesting the supersonic Concorde. He retired as an airline executive and went on to a second career as an inventor.

The founder and CEO of three companies, he holds twenty-four patents in medical technology. He is working on bringing to market an intervention for sleep apnea that removes the burden of wearing a pressurized “CPAP” mask at night.

Margie retired in 2009 and quickly adjusted to her freedom.

“I absolutely love it,” she said. “The first night I left my house to go to the gym and realized I didn’t have to call NBC News and tell them where I was going was so liberating.”