Giving back to help others succeed 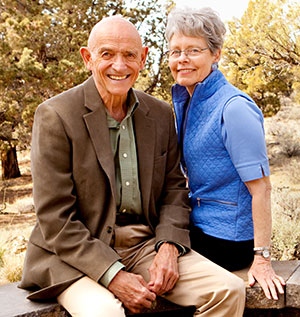 “We take a strong interest in helping students who have financial challenges similar to ours,” said Jim who paid for his education with his own earnings.

Jim, who retired as CEO of St. Charles Medical Center in Bend, Oregon, learned the value of hard work as a paperboy in Great Falls, Montana. After high school, he saved enough from jobs like icing boxcars and working in a turkey plant to cover the 1960s-era cost of a year at the UO.

Next, through a succession of short-term loans, campus jobs, and ROTC, Jim achieved his goal of graduating with two degrees—without incurring long-term debt.

However, the Lussiers realize that now, even students who work as hard as Jim did must take out major loans to pay for college.

That’s why Margie and Jim have given generously to the UO over the years.

“It’s all about leaving a legacy so that somebody else can benefit from our success and the opportunities we’ve been given,” Jim said. “Then that success is passed on and multiplied by others.”

Jim credits his academic preparation in sociology and business, coupled with practical experience and mentorship he received in campus jobs, with setting him up for lifelong success.

After fulfilling his ROTC commitment, Jim hired on as personnel manager for St. Charles. Soon after, he was tapped to help mastermind the hospital’s growth into a regional trauma center serving four central Oregon communities.

A past member of the State Board of Higher Education, Jim’s organizational talent now benefits people through his work on behalf of Rotary International, where he is a district governor.