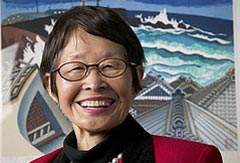 Retired professor Yoko McClain traded being a landlord for receiving hassle-free guaranteed income for life. Her planned gift to the University of Oregon also reduced her taxes.

A charitable remainder trust helped Yoko McClain ’56, M.A. ’67, reduce her tax liability, earn lifetime income, and increase the impact of her charitable gift to the University of Oregon. It also simplified her life.

McClain, a Tokyo native and UO professor emerita of East Asian languages and literatures, came to Oregon to attend the university in 1952. Her study in the U.S. was made possible by a grant from GARIOA (Government Aid for Relief in Occupied Areas), now known as a Fulbright.

“In those days Japan was very poor, so to receive a scholarship as well as work part time was the only way to go to school.” says the Tokyo native. “I would like to give back what I received to the current students.”

With the help of her financial adviser and UO’s Office of Gift Planning, she decided on a gift of real estate.

In 1960, Yoko and her husband, Robert, paid $6,300 for their first home. They kept it and their second home as rentals. However, after the death of her husband, she found being a landlord more and more difficult.

“When you have a house, something always goes wrong,” she says. “After I retired, I was hiring somebody to do everything. You’re always fixing something.”

Then she realized she could avoid capital gains tax associated with selling the houses and eliminate the responsibility of managing the homes through a charitable remainder trust.

Tom Roehl, her financial advisor, encouraged her to transfer ownership of the two houses to the university so that she could establish the trust.

“We knew she held strong convictions about giving to the University of Oregon,” says Roehl. “The process was a smooth one that benefited both Yoko and the university. The charitable remainder unitrust was a great planning tool in this instance.”

“Income is always good,” she says. “That beats just collecting rent. That kind of worry you don’t need, so it’s much easier.”