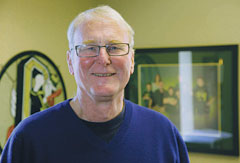 “Education is even more important now.”

One of Doug McKay‘s essential qualities is a deep and abiding sense of responsibility. That trait, together with his business acumen, makes him especially valuable as a trustee of the University of Oregon Foundation.

From piloting B-52s in the early 1960s to helping dozens of local nonprofit organizations grow and thrive over the last five decades, the 1959 UO graduate can always be counted on to quietly step up and lead.

“Education is even more important now than when I was growing up,” he says.

McKay started working long before he arrived on campus as a freshman business major, bagging groceries and stocking shelves in his family’s iconic McKay’s Market stores and then — while still in high school — as cofounder with his parents and sister of McKay Investments.

At the UO, McKay joined Air Force ROTC and Delta Tau Delta. He went on to finish near the top of his class at flight school and served in the U.S. Strategic Air Command. When he returned home to Eugene, he renewed his community ties and took on the challenge of keeping his old fraternity house afloat during the period when Greek organizations saw steep membership declines. Thanks largely to his efforts, the Delts still occupy their original house.

Long an avid supporter of the Ducks, McKay also belongs to the UO’s Arnold Bennett Hall Society. Recently, he honored his late parents Miles and Eleanor by funding a technology center in their name for the Lundquist College of Business. Now he’s in the process of helping fund a similar facility, also for business, as a tribute to his late wife Carol, whom he met while stationed at Loring Air Force Base in Caribou, Maine.