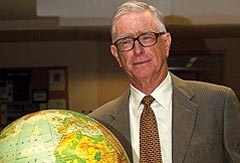 When Donald Mickelwait sold his company, he took advantage of the opportunity to save taxes by making a substantial gift to the University of Oregon.

Economist Donald Mickelwait credits his favorite college haunt-the UO’s main library-with launching him toward his life’s work as a global expert on sustainability.

He says long-range solutions always require solid research, whether the challenge is reviving wheat farming in Iraq or stopping the desertification of western China.

That’s why he has named the UO Libraries as the beneficiary of a charitable remainder unitrust funded with $1 million in appreciated stock from the sale of one of his companies.

“I saw the opportunity to shift Uncle Sam’s cut of the stock sale to the library and I took it,” says Mickelwait, who earned bachelor’s and master’s degrees at the UO in 1956 and 1960.

In addition to reducing his tax bill, Mickelwait’s trust with the UO Foundation provides him with annual income-for life.