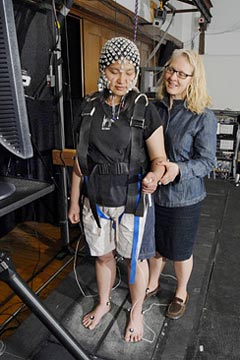 Elaine Little coaches fellow graduate student Sujitra Boonyong of Thailand through an experiment aimed at revealing why some people are plagued with unexplained falls as they age. A 1937 graduate’s bequest helped Little present her findings in Italy.

What is going on in the brains of older people who suddenly fall down — hard — for no apparent reason?

UO doctoral student Elaine Little is making inroads on answering that question. Her early findings have turned the heads of leading researchers in fall prevention.

Little looks at how brain waves change as people attempt to keep their balance while concentrating on a visual task. The idea hit her when she took a UO psychology course as part of her doctoral program in human physiology.

“My psychology professor used a visual task to predict our working memory capacity,” she said. “I thought, why not use that to sort out the cognitive functions involved in controlling posture?”

Her early findings indicate that if we perform mental gymnastics while we’re in motion, some of our brain’s resources get rerouted to help maintain posture.

“We hope this will help to uncover exactly what is changing in people who experience unexplained falls as they grow older,” Little said. “I love this project. It’s certainly broadened my perspective on how the brain works.”

However, if not for a gift, the former physical therapist from Canada could not have presented her findings in person this June at the meeting of the International Society for Posture and Gait Research in Bologna, Italy.

As with many of today’s students, Little and her family have made sacrifices so she could pursue her doctorate. She gave up her job as a physical therapist. Her husband continues to work in Calgary, Alberta, to make ends meet. Spending $450 toward the conference registration fee wasn’t in the cards.

That’s when a bequest from the late Ursula “Sue” Moshberger came to the rescue. The 1937 alumna earned her bachelor’s degree in physical education. Her gift created an endowment that provides cash awards to help cover expenses like this.

“I am very thankful for this gift,” Little said. “It made all the difference.”

Moshberger grants have helped send nineteen promising UO students, including undergraduates, to key professional meetings since the endowment was activated in 2007.

“My students often form new collaborations with other scientists that blossom into exciting research projects across disciplines and across national boundaries,” she said. “Gifts like the Moshberger bequest are very important.”