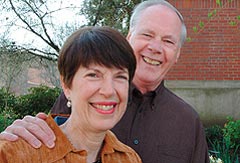 About ten years ago, Ginny Clark Reich ’64 and her husband, Roger, decided to provide for the future generations of UO students by including the university in their will.

With the assistance of the university’s Office of Gift Planning, the Reichs were able to tailor the language in their will to ensure their bequest will benefit the UO’s Robert D. Clark Honors College.

As one of the first honors college graduates, Ginny has fond memories of the college’s early years.

Due to a shortage of classrooms, her favorite social science class met in a room above the College Side Inn, a restaurant and lounge located where The Duck Store (formerly the UO Bookstore) now stands.

As they sat in class, popular songs of the day drifted up from the jukebox below. At one point, Ginny recalls, the students took bets on how many times Henry Mancini’s “Moon River” would repeat during class.

Otherwise very little distracted Reich and her colleagues from the spirited discussions that are a hallmark of the Honors College experience. “The class was so engaging; we would continue our discussions on the sidewalk afterward,” she said.

Ginny’s strong family connections to the university begin with her father, the late Robert Clark, for whom the UO honors college is named. He was the university’s eleventh president and a speech professor. Her sister, Suzanne Clark, is a UO English professor. Ginny, who also is an educator, supports a variety of areas on campus.

As they have become more aware of the honors college’s financial needs, the Reich’s plans for their bequest have developed further.

Roger said they now are consulting with the university’s gift planning office to update their will. They also are exploring ways to leverage their estate plans into life-income gifts.

“The office is such a great resource for us all,” Roger said.