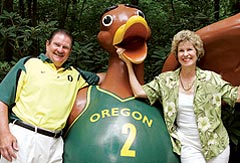 A Duck-loving pair from Portland plans to help future generations of University of Oregon students achieve the American dream.

About a decade ago, Ray and Carla Robertson decided to leave the bulk of their estate to the University of Oregon.

Their will directs the university to divide the bequest equally between professorships and endowed athletic scholarships.

“We would like to see the academic community and the athletic department embracing one another,” Ray says. “This will make for a stronger University of Oregon.”

Though neither holds a UO degree, the Robertsons feel a connection to the university equal to the most devoted alumni.

“My connection to the UO is visceral,” Ray says. “It has its roots in athletics going back to when I was just a little kid going to football games at Hayward Field with the Knothole Gang.”

When it came time for college, Ray chose to spend his freshman year at the UO even though pharmacists were trained at Oregon State, where he went on to earn his pharmacy degree in 1970. In Corvallis, he was a vocal spark of green and yellow amid the black-and-orange faithful during Civil War contests. Summers brought him home to the UO, where he took math classes for fun.

“One of my best math professors at the UO almost convinced me to switch majors and institutions,” he recalls fondly.

Ray looks back with appreciation on his parents’ refusal to let him work while in school.

“I could go to college and live part of the American dream because tuition was affordable,” Ray says. “Carla and I feel very strongly that our support of the university is the best thing we can do to help make the American dream possible for others.”

Because of their generous bequest, Ray and Carla are charter members of the new Len Casanova Legacy Society in addition to belonging to the Arnold Bennett Hall Legacy Society.