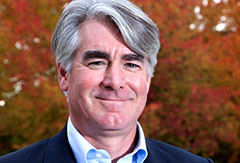 Not many people can say they captained a commercial fishing boat while studying medieval French maritime law as the prelude to successful careers in global finance.

However, Jim Shephard ’80, CEO of AIG Asset Management (Europe) Limited, did just that during his first three years as a full-time student in the UO’s Robert Donald Clark Honors College.

Fortunately for the North Eugene High School graduate, his professors were open to his ideas for customizing a humanities major and enthusiastic about helping him get the most out of college.

“The support I got from my professors was invaluable in allowing me to succeed,” he said. “My family encouraged me and pushed me but I didn’t have role models to follow because nobody had gone to college before.”

Fishing can be unpredictable, so Shephard often had to work extra jobs to stake the boat for the next season. One term he worked full time as a night watchman in a lumberyard—on top of taking a full course load.

At that point, it occurred to him that life would be easier if he devoted himself to academics.

With a financial boost from a scholarship, he stopped fishing and took advantage of the UO’s study abroad program at Poitiers. He returned there as a Fulbright Fellow after finishing at the UO—and earned two advanced degrees before moving on to law school at Tulane and landing his first job with a leading international law firm.

Who could have predicted that the hiring partner would share Shephard’s passion for medieval history?

It came up early in the job interview, and suddenly his decision to pursue a liberal arts education turned out to be the key to an amazing career in law and finance.

Eighteen years flew by and Shephard found himself in a position to help others. He decided to call the honors college dean to see about setting up scholarships for study abroad and for international students.

“I thought, here I am in Paris. I’ve got this interesting job because of the opportunities I had in the honors college and studying abroad,” he said. “It was really important to me.”

Since then, he’s become a champion of strengthening the UO’s standing as an international university.

As chair of the honors college advisory board, he leads the drive to transform Chapman Hall into a state-of-the-art home for the honors college. He also serves as one of the UO Foundation’s first international trustees and recently joined the Provost’s Advisory Council.

Above all, he enjoys receiving updates from the UO’s Shephard Family Scholars. “My wife Florence and I consider it a privilege to be able to support these young people,” he said.