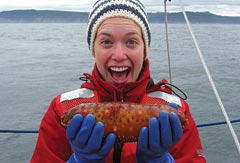 Katie Thomas ’10 spent a summer studying marine life at the Oregon Institute of Marine Biology in Charleston because Laura Bickerstaff included a bequest in her will to fund student awards for study at the institute.

She only dropped in once — twenty years ago — to see what went on at the UO’s Oregon Institute of Marine Biology in Charleston but the late Laura Bickerstaff’s generosity now helps as many as five UO students a year.

Jan Hodder, a marine science professor, remembers giving the Coos Bay woman a tour. It was the only contact until Hodder learned Bickerstaff had left the institute about $60,000 in her will. No strings attached, and no explanation.

“What an amazing thing to do,” Hodder said. “Her gift has created the means to fund student awards of $500 to $1,000 — amounts that make all the difference for students struggling to afford college.” So far, Bickerstaff’s gift has helped thirty-four UO juniors and seniors.

For Clark Honors College senior Katie Thomas a $1,000 Bickerstaff Award meant freedom to focus entirely on the academic experiences offered by the institute without worrying about how to pay her bills. She graduates in June and plans to pursue a graduate degree in marine studies.

“I cannot express how appreciative I am for the financial support that donors have provided to me,” said Thomas. Scholarships have covered nearly all her college costs.

“I am motivated and driven by the knowledge that UO donors find my academic pursuits to be worthwhile,” she said. “I hope that my contributions in the future are worthy of their investments in me.”