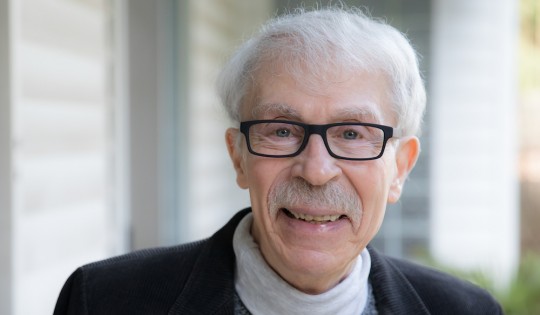 Steve Dimeo was a student in what is now the UO’s Robert Donald Clark Honors College back when it was in a basement. He loved it so much that he’s made annual gifts since 1992. However, until recently, he had no idea how much he might benefit by making an estate gift.

When Steve faced an unexpected tax bite resulting from an inheritance, a member of the UO’s gift planning team explained how a gift to endow honors college scholarships could remedy the situation.

“I don’t think this is common knowledge,” he says. “I’m grateful

to the UO for showing me how a charitable remainder trust could not only reduce my taxes but also earn interest and pay me 5 percent a year for the rest of my life. I felt I couldn’t lose by doing this.”

A property tax appraiser by day and fiction writer by night, Steve earned his degree in 1967 as one of the “Oregon 12,” the honor bestowed on graduating seniors with top GPAs. He went on to earn advanced degrees elsewhere and spend a Fulbright year in Germany.

Steve says his biggest influence while at the UO was Thelma Greenfield, his Shakespeare professor. “I planned to major in journalism but she inspired me to switch to English,” he says.

He became the Oregon Daily Emerald’s first entertainment editor, gained steady work as a film reviewer after graduating, and had stories published in Oui and other magazines—all while pursuing his dream of becoming a professor.

However, by the time he earned his doctorate, a major economic recession created a glut on the market for young professors. Thanks to the federal Comprehensive Employment and Training Act, he went into public service.

He also kept writing, turning out 26 novels in 46 years—although none were published until last November. It’s the first in a set of lighthearted mysteries featuring the semiautobiographical adventures of a detective named Nick Christmas and his intrepid secretary, a “thinly disguised” version of Steve’s late wife, Nettie.

“I never run out of ideas for stories,” he says, noting that he’s already outlined 16 more books for the series. “This way, I get to relive some of the best parts of my life.”