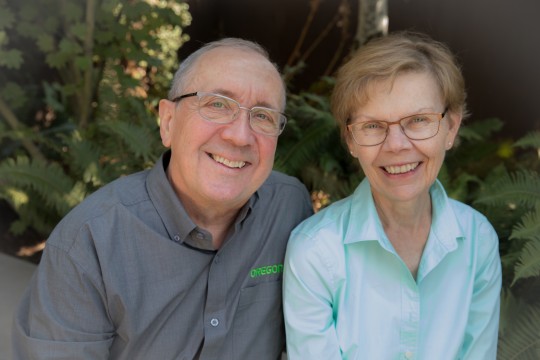 Growing up in Eugene, Christina and Ron Friberg attended the same high school and came to the University of Oregon feeling grateful their parents were willing to sacrifice to pay for college.

We’re both from modest income families,” says Ron. “We conserved costs by living at home and working part-time.”

After earning two degrees apiece, they went on to successful careers, Ron as a financial controller and CFO for various industries, and Christina as a program director for Eugene’s Pearl Buck Center. Now they’re enjoying retirement and the feeling of satisfaction that comes with knowing part of their estate will help future PathwayOregon students and student-athletes.

For the Fribergs, their gift is a way to pay forward help they received from favorite professors.

Ron earned a bachelor’s in mathematics and an MBA. He credits Paul Frishkoff for instilling a “questioning, problem-solving” approach to accounting and Willis Greer for mentoring him through his master’s research paper, which was published in the Accounting Review.

After she earned her bachelor’s degree in anthropology, Christina says education professor Knute Espeseth encouraged her to get a master’s in special education. He arranged for a practicum that led to her long career at Pearl Buck.

“We consider ourselves lucky to have attended the UO at a time when tuition was about $100 per term” says Christina. “We want to help students and families who are struggling to afford college.”

The pair say the university was always part of their estate plan. When they were ready to sell their rentals, they decided to work with the UO Office of Gift Planning to place the properties into a charitable remainder unitrust.

“Doing this generated a large tax deduction, which dramatically reduced our taxable gains on the other two rentals,” says Ron. After the properties sold, the Fribergs started receiving payments, which will continue for the rest of their lives.