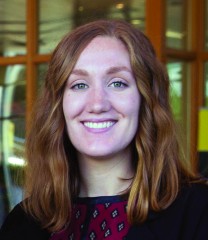 It’s amazing how frequently people report that a single professor or class set their course in life.

That’s true in the case of recent graduate Michaela Giunchigliani, one of 23 students selected last spring for The Art of Producing, a new course supported by a gift to the Cinema Studies Program from Rima and Harlan Strauss, MA ’70, PhD ’74 (See Second Act).

The course, which examined the ways in which a producer serves as an important force behind a film, featured plenty of face time with award-winning producer Neil Kopp as the inaugural Harlan J. Strauss Visiting Filmmaker.

“It’s one of the most practical courses I’ve taken,” Giunchigliani said. “If I hadn’t taken this class, I don’t think I would have known that I want to be a producer.”

What’s more, she and her classmates were able to meet the Strausses when they visited campus.

“Rima and Harlan were happy and excited to see that we were learning a lot,” she said. “We learned the lingo. I think I know what I’m talking about now, and that’s the whole point of college.”

The Strauss endowment also brought private, advance screenings for two of Kopp’s films to campus for the students, faculty, and staff, with the added bonus of in-person appearances by the writers.

“Through this ongoing gift, the Strausses are really opening doors for our students,” said Mike Aronson, director of the Cinema Studies Program.

Five years since its founding, cinema studies is one of the UO’s most popular majors with a growing alumni base working at Disney, Paramount, Pixar, NBC, and an all-women’s production studio, to name a few. Some have started their own companies. Recently, the program received its first gift from a graduate.

“I got a great letter from a first-generation student who’s working for Trailer Park, the company that makes previews for all the big movie features,” Aronson said. “She started as an intern and is now working as an editor. She gave us $200!”