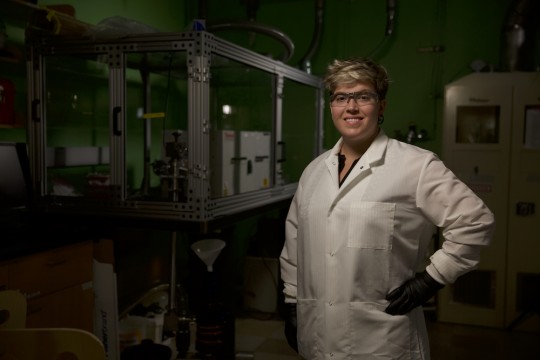 As a doctoral student doing research aimed at restoring vision in people with macular degeneration, Kara Zappitelli has an overflowing plate.

But when funding came through for North Star, a new program aimed at preventing undergrads from bailing on science majors, she stepped up immediately.

“We’re giving them a support system so that they won’t feel alone when things become difficult,” says Zappitelli, who coordinated the program’s live-in early orientation program last summer. “I would have given anything for a program like this when I was a freshman.”

Nationally, only half the students who enter college as science majors stay with it. For women and underrepresented minority students, the retention rates are far lower. Together, the loss of talent is straining our nation’s scientific competitiveness.

Now, thanks to donor-funded grants from the Knight Campus and the UO’s Division of Equity and Inclusion, the North Star Project is proving to be a promising antidote.

The action begins two weeks before fall term when the North Star team hosts dinner for the new arrivals and their families. The next day, parents leave and graduate students welcome the freshman students into the UO’s scientific community by showing them what scientific research is about.

The experience includes a weekend camping and stargazing adventure at the UO’s Pine Mountain Observatory, intensive courses in physics, math, and computer programming, and closes with an evening graduation ceremony.

“The moment is emotional and full of courage,” says North Star founder Benjamín Alemán, an assistant professor of physics and Zappitelli’s thesis advisor. “It’s clear that the North Star students form strong bonds with each other and with the team.”

“So far all of the North Star students are staying with science, and most have found places in research labs,” she says. “It’s incredibly rewarding to see that.”

Learn more in the winter issue of Oregon Quarterly Magazine.