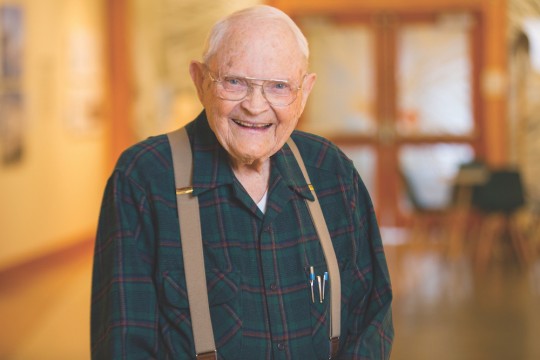 It’s an astounding number—and an apt metric—for a long and rewarding career in public schools.

Add to that the number of lives transformed by his late wife, Carol Lavona O’Brien Mead, BS ’48 (education), MEd ’58, a middle school teacher for decades.

Plus the students who benefit now—and those will benefit in the future—from the Meads’ philanthropic gifts to the UO.

It all adds up to a grand total.

“I figure we owe the university just about everything positive that’s happened in our lives,” says Mel. “How could I not give back?”

He met Carol on October 9, 1946, at a mixer in Gerlinger Hall (the same building where he would celebrate his retirement in 1985).

“That was the beginning of over 70 years for the two of us,” he recalls. “That was the luckiest day of my life.”

Over the years, Mel and Carol have given generously to the UO’s College of Education, College of Arts and Sciences, and, most recently, PathwayOregon Scholarships.

Mel says advice from the UO’s gift planning team has helped him and Carol to increase the impact of their gifts over the years while meeting their financial goals.

Above all, he is delighted to be able to give future generations the enriching experience that has meant so much to them—earning a UO degree.

“I think probably in more cases than we typically realize, it is the make-or-break of a young person’s life,” says Mel.

“It sets the goals for just about the rest of your life in a very special way.”