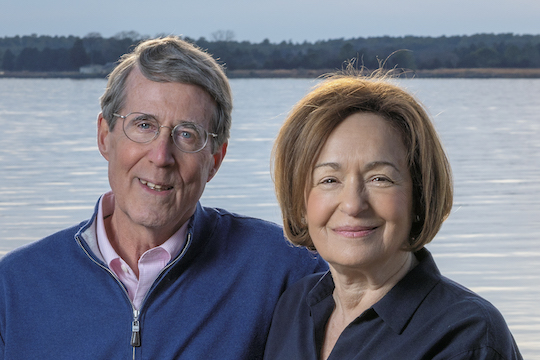 When Dan McGuire was a freshman in the UO honors college in the early 1960s, it cost $1,200 a year to attend. And that covered everything.

Sounds like a steal. However, he was only able to afford it thanks to a state scholarship that covered a third of the cost, even though he worked every summer and his parents contributed the rest.

McGuire, who grew up in Portland, Oregon, fondly remembers studying with classmates in the Friendly Hall basement, which was the honors college headquarters.

A math major, he also remembers having no idea what he wanted to do when he graduated, until he saw a sign—a literal sign—as he walked across campus. It was a poster announcing the opportunity to earn a master’s degree in education as a Harvard-Oregon Fellow.

“It wasn’t just Harvard, it was suddenly I realized I wanted to be a teacher,” he says. He applied, bought his first suit, and took his first-ever plane ride to Cambridge, Massachusetts, where he was accepted into the program.

After earning his master’s and teaching for two years, McGuire helped train future math teachers with the Peace Corps in Peru before returning to Harvard for his EdD in school administration. For much of the last 27 years of his career, he taught math and served as an administrator at McDonogh School in Maryland. Originally founded to serve disadvantaged boys and orphans, its motto is “We give more than we take.”

“The school is now co-ed, but its mission is still to give kids a chance who wouldn’t have any otherwise,” he says. “It was my great good fortune to work with those students.”

McGuire was still in grad school when he received his first annual fund request from the UO. He gave what he could, and has faithfully done so ever since.

“Initially I felt I was paying back my state fee scholarship, but I wanted to do more than that,” he says.

“I am forever grateful for the quality of the education I got. I didn’t realize how good it was until I went to the next level.”

As he was preparing for retirement a few years ago, he decided to make a gift through his will to provide scholarship assistance for honors college students.

“I want my money to help kids have a good education at Oregon who otherwise might not be able to do it,” he says.

“I hope that others have the same appreciation for what they experienced, and will also be moved to give, so that students like I was 50 years ago can have the same excellent liberal arts experience that I did.”