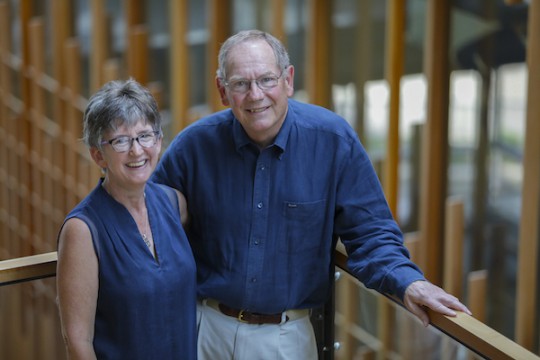 Amy and Ross Kari met over a pizza in the student union, married while they were still students, and stayed closely connected with the UO throughout busy careers that took them away from Oregon.

Now that they’re retired, they’re even more involved. Ross serves as a UO trustee and Amy, a former UO Foundation trustee, is a longtime advisory council member for the Clark Honors College and the College of Education. In May, they shared one of the university’s highest honors, the Pioneer Award.

Amy, who describes her UO transcript as “the definition of a broad-based liberal arts education,” discovered she loved history and art so much as a freshman that she switched majors from chemistry to art history. Her interests would later come full circle in her work as a teacher and math specialist.

Meanwhile, Ross capped his bachelor’s in mathematics with an MBA, a combination that “proved invaluable” as he rose from financial analyst to chief financial officer at Wells Fargo.

Both worked to pay for school—Amy during summers and Ross at least part-time year-round as an undergrad. During his first year in the UO’s MBA program, he managed a pizza parlor full-time. Nearly 40 years later, you can still hear the relief in their voices when they tell how full-ride merit scholarships (Amy in her senior year, Ross in his second year of grad school) allowed them to stop working.

When the Karis made their first gift to the UO, $5 for the library, they were still students and a loaf of bread cost about 50 cents. “We were able to graduate debt-free, but as we became more involved over the years, we began to realize that families today face things that we were not faced with,” Amy says.

Ross points out that tuition now is about eight times that of the early 1980s, when he and Amy earned UO degrees. “That’s why part of our focus is supporting PathwayOregon—to help students who otherwise would not be able to afford to go to the UO,” he says.

The Karis have included PathwayOregon in their estate plan along with several other UO programs that rely on private support. “There are creative ways to do an estate gift without taking on any risk,” Ross says. “I would encourage people to explore them with members of the UO’s gift planning team.”