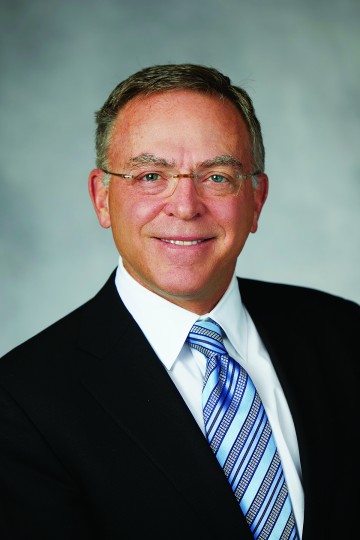 The Duck who bought his dad’s side business for $10,000 in 1984 and built it into a $26 billion global leader believes a strong liberal arts education is more valuable than ever.

Steve Raymund is the founder of Tech Data, a Florida-based company that ranks No. 108 on the Fortune 500 and is enjoying its eighth straight year on Fortune magazine’s list of World’s Most Admired Companies. It is among the world’s largest wholesale distributors of Internet-based technologies, products, and solutions.

Within 15 years of taking over the company, Raymund was welcomed into an elite industry hall of fame that includes Bill Gates, Steve Ballmer, William Hewlett, and Steve Jobs. In 2012, he received a lifetime achievement award as one “whose career has changed the understanding of what global logistics really means.”

However, when he was finishing his bachelor’s degree in economics in 1979, the market sector Raymund has defined didn’t exist. A native of Florida, he’d fallen in love with the UO after an older sister enrolled. Looking back, he says professors who pushed him to think critically helped open a path to success.

“The UO did a good job of educating me with a traditional liberal arts curriculum and all the benefits it provides for becoming more worldly, well-read, and thoughtful about what is happening around you,” he says.

He’s also stepping up his personal involvement with the university. In 2018, he will begin serving as UO Foundation chair.

“I have a deep appreciation for all kinds of different areas I was exposed to at Oregon, and I want to help boost the university’s overall excellence,” Raymund says. “More than ever, the university is in charge of its own fate. When you believe in the management, you want to fund their vision. I’m very proud to be, in my own small way, part of that.”