Thanks to you, he’s learning how to advocate for human rights 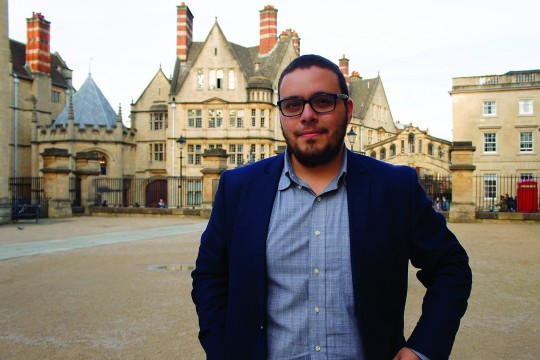 Growing up in the Brazilian countryside, Iago Bojczuk never imagined attending the University of Oregon’s Robert Donald Clark Honors College. The fact that his UO experience has included living in the Oxford University residence hall that was home in the 1930s to one of his favorite poets, Vinicius Moraes, is the “cherry on top of the cherry.”

The junior media studies major wants to help others become global citizens after spending spring break in England as one of seven UO students chosen for Oxford Consortium Fellowships.

“This human rights workshop changed my understanding of what it means to be human,” he says. “If we wish to advance human rights, we must first create and develop human bonds. This is the way to form communities that recognize the common ground we all share.”

The Oxford program is the brainchild of Professor Emeritus Cheyney Ryan, who founded it five years ago with financial help from donors led by a former student, Steve Raymund.

“I feel privileged to support a program that teaches people to mediate conflicts and make peace in the world,” says Raymund, founder of Tech Data, one of the world’s largest technology wholesalers. “These skills are in short supply, and the UO’s program is gaining national recognition.”

Ryan, a courtesy professor in the Clark Honors College, divides his time between the UO and the Oxford Institute for Ethics, Law, and Armed Conflict, where he is a fellow. He remembers Raymund as a serious, thoughtful freshman who spoke up often in two of the courses he taught as a newly arrived UO faculty member in the late 1970s.

“Steve cares about students, and this gift really touches their lives,” he says. “It’s enormously encouraging to people who work on human rights issues to have people like Steve supporting them.”

Bojczuk, who receives a full scholarship from the UO’s International Cultural Service Program, heartily agrees. “I am grateful to University of Oregon supporters for allowing me to acquire the values of being a global citizen,” he says. “I will always carry this with me.”