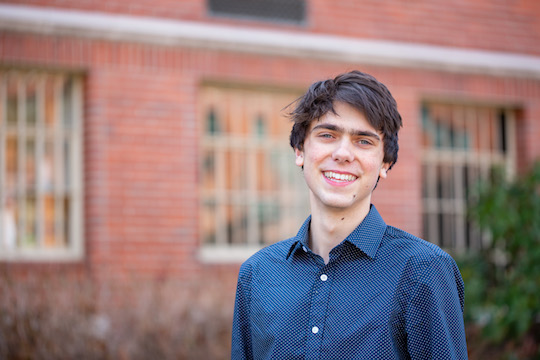 Astonishing. That’s how Jakob Hollenbeck describes the change in his writing as the result of taking the first Calderwood Seminar in Public Writing offered by Clark Honors College.

“I love my big words, but that type of writing is implicitly exclusionary,” says the honors college sophomore from Beaverton, Oregon. “If I want to have an impact, I need to be understood.”

The UO is among just four honors colleges in the nation chosen for the Calderwood progam, which is part of the legacy of philanthropist Stanford Calderwood, a champion of the arts who placed the highest value on clear communication.

“The Calderwood experience involves tearing apart every aspect of your writing to make it better and more concise,” says Hollenbeck, a double major in political science and economics. “It is wonderful, intense, really hard, and so important.”

He intends to emerge from the seminar with an op-ed comparing the process of reconciliation after the Civil War to current rhetoric around bipartisanship. In both cases, he says, “people want unity without actually working on the disagreement. But if we look at how we get people on our side, it is not by writing them off as bad people.”

The idea stems from his work as research assistant to Tim Williams, an honors college history professor who is tracing the roots of the “Lost Cause” narrative to letters sent home by Confederate prisoners of war.

Hollenbeck’s opportunity to work with Williams was made possible by an estate gift from the late Dr. William Rudd, BS ’69 (chemistry) to pay for his stipend.

Rudd, who went on to become an orthopedic surgeon after graduating from the honors college, set up an unrestricted endowment to give the dean flexibility.

Hollenbeck says he feels grateful not only for Rudd’s gift, but also for the gifts behind his Presidential and departmental scholarships. As a Wayne Morse Scholar, he is aware that he benefits from the gift that helped launch this program originally, as well as for annual gifts that support annual field trips and internships.

“I very much appreciate how donors are filling the void that the state has left,” he says.

With the total cost of attending the UO nearing $27,000 a year, Hollenbeck says working your way through college isn’t possible—scholarship gifts are lifelines for many students.