Your gifts create options that no one could foresee 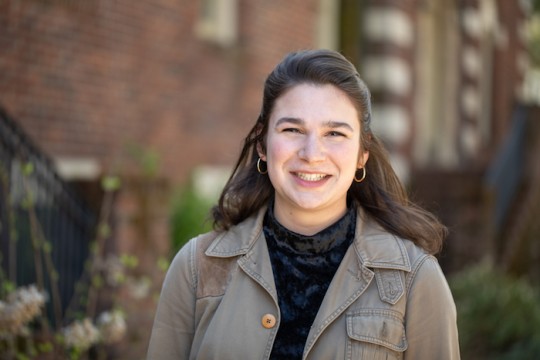 A scholarship made it possible for Lily Gordon to earn two bachelor’s degrees in four years.

Growing up in Salem, Oregon, Lily played soccer and the trumpet, wrote for the newspaper, and studied German.

She fell in love with the country as well as the language during a gap year in Aachen, playing gigs around town, joining a soccer team—even writing for the local paper.

She planned to enroll in an out-of-state college, but that changed midway through her time away. “In German, the word ‘fernweh’ means ‘an urge to go to faraway places,’” she says.

“Before going abroad, I felt it intensely, but after a while, I longed to open my window and smell the rain in Oregon again.”

She remembered the UO has great programs in journalism and languages. When she discovered that a UO residence hall reserves an entire floor for people who want to immerse, she set course for Eugene with the goal of earning degrees in German and journalism.

She poured herself into campus life: joining the marching band, reporting for Duck TV, acting in a German play, and becoming president of the UO chapter of the Public Relations Society of America.

She also took advantage of the career center, landing two internships that coincidentally made use of her language skills. Then, during junior year, she discovered she could graduate a year early by shifting German down to a minor.

But when the German department offered her a Herbert Merker Undergraduate Scholarship, Lily decided to stay.

“It’s a million percent worth it to complete the degree,” she says. “I am so thankful for my scholarship.”

After graduation, Lily will join the PR staff of the Silicon Valley–based education startup where she interned. It has partners in German-speaking countries.