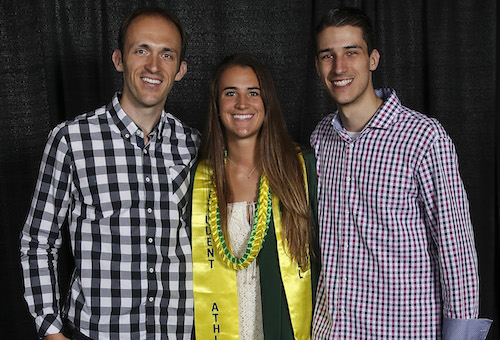 Sabrina Ionescu may be the greatest basketball player ever to hit the court at Matt Knight Arena, (she holds the record across NCAA men’s and women’s basketball for triple-doubles) but she is every bit as focused as a student.

Her father fled Romania to seek asylum in the US around the time of the 1989 revolution, but her mother and older brother were unable to join him until 1995. They settled in Walnut Creek, California, where Sabrina and her twin brother Eddy were born and raised.

A basketball phenom from childhood, Ionescu is the first in her family to earn a college degree. What’s remarkable is that she did it in three years rather than the usual four.

Initially, she was motivated to pursue the year-round, tightly compressed class schedule required to earn a “degree in three” because she hoped to start playing professionally after her junior year. As the WNBA draft approached last April, Ionescu was on track to pick up her diploma in June. Everyone predicted she would be the No. 1 pick.

But she still had one more year of eligibility. One more chance to make a run for the NCAA championship with her close-knit team of all-stars. When Ionescu made the surprise announcement she would stay at Oregon to deal with “unfinished business,” the Ducks instantly became the favorite to win the national title in 2020.

Now, determined to use her years at Oregon to their full potential, she is working toward her master’s degree in journalism (advertising and brand management). She takes nothing, especially the opportunities available to her at the UO, for granted.

“I wish donors knew just how impactful their scholarships are to us student-athletes,” she says. “Without my scholarship, I would not be able to afford college or books.”

And she is on track to pick up that master’s degree this coming June.

“Having the blessing of being able to come to the UO to study while playing the sport that I love has been an honor,” she says.