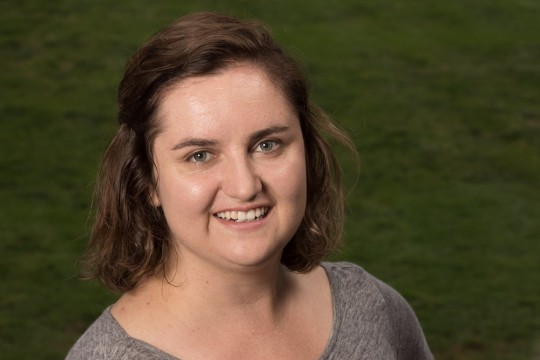 Laurel Smith was still in high school when she found her calling as a speech and language pathologist.

“My mom had a student in her pre-kindergarten class who was deaf,” she says. “He was the child of an undocumented immigrant, so he hadn’t received any help even though he had a lot of needs.”

When educators transferred the boy to a school for the deaf, Smith shadowed the speech pathologist who worked with him there.

“Seeing the leaps and bounds this boy had made a year later, I knew I wanted a job where I could help people do that,” says Smith, a Clark Honors College graduate with bachelor and master’s degrees in communication disorders and sciences from the UO.

She was hired right away by the Eugene public schools, where her caseload includes about 50 students from kindergarten through high school.

But none of this would be happening if Smith hadn’t earned a major scholarship during her junior year—one that covered her tuition all the way through graduate school.

“I was skeptical about being able to continue because it cost so much, but the Quest Scholarship made it possible for me to stay,” she says. “My education at the UO is a complete privilege—a blessing—and it would not have been possible without the generosity of donors.”

By donors, Smith means not only those behind her scholarship, but also everyone who contributed to building the HEDCO building for the College of Education ten years ago.

“The UO’s clinical facilities are absolutely phenomenal,” she says.

“We see donors’ names by every door, so we know the value of giving back. My scholarship has allowed me to stay and serve the community I’ve grown to love, and I am so grateful.”