Your Gifts open paths to success 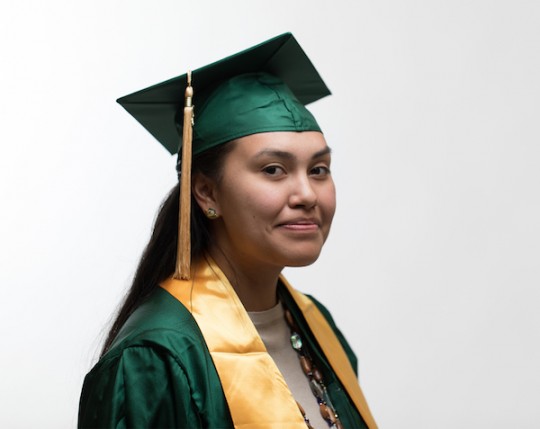 Haley Case-Scott says her PathwayOregon scholarship has transformed her life.

“It’s not likely that I would have come to the UO otherwise,” says the political science major from Chiloquin. “My family is extremely proud of me because I am the first to go to college.”

Haley felt isolated when she first arrived on campus, but says the advising, workshops, and social events that come with a PathwayOregon scholarship brought her out.

“They helped me find my community,” she says. “I’ve been a peer advisor for PathwayOregon for the past two years, and it’s really cool to help support the building of that community even more.”

Haley, a member of the Confederated Tribe of Siletz Indians, is also a descendent of the Klamath Tribes, the Sokaogon band of Chippewa Indians, and the Yurok Tribe. She worked during the summer as a student research assistant with the Tribal Climate Change Project. In the long term, she plans to work on behalf of indigenous people—ideally, where she grew up.

“What I’m focused on right now is climate-change issues and how they affect indigenous people,” Haley says.” I believe indigenous people are being affected firsthand. I’m really worried about the loss of first foods and the complete uprooting of tribal lifeways and cultures.”

Whatever the future brings, she’s grateful for the opportunities she received through PathwayOregon.

“They’ve helped me in so many ways and supported me throughout my time here,” she says. I’m going to really miss it.”

As we mark its tenth anniversary, the UO’s PathwayOregon program exceeds our hopes. It helps ensure that academically qualified Oregon high school graduates eligible for the Federal Pell Grant will have their tuition and fees paid for four years.

Pathway scholars also receive advising to help them navigate college life and graduate in four years—support that’s crucial, since most are the first in their families to go to college.

As of June, their four-year graduation rate is double that of Pell-eligible Oregonians the year before PathwayOregon began.

Gifts from donors like Ross and Amy Kari secure our future ability to make the Pathway promise to increasing numbers of deserving young Oregonians.