It feels rewarding to give 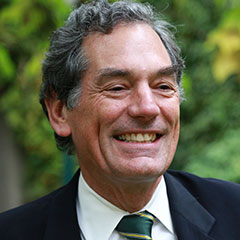 “I tell people I was born a Duck, even though I didn’t go to school here,” says champion distance runner Jon Anderson, a Cornell University graduate who is among the UO’s strongest supporters.

Of course, when your childhood home is four blocks from Hayward Field and your dad, a proud UO graduate, becomes the UO’s alumni director on returning from WWII, it’s not surprising if your blood runs green and yellow.

When Jon joined his high school cross-country team, his dad encouraged him to ask a family friend, the UO’s head track coach, for tips. The next thing he knew he was helping road-test some of Bill Bowerman’s homemade track shoes.

“Bowerman was experimenting. It wasn’t just the waffle sole,” Jon says. “There were several other things. He’d say, ‘hey, try these.’ Some were good and some fell apart.”

Jon went on to secure the Ivy League cross-country championship for Cornell in 1970, become “All-American” at the NCAA track-and-field championships, compete in the 1972 Olympics, and win the 1973 Boston Marathon.

Meanwhile, his father Les was building the family business, Random Lengths Publishing, and serving as mayor of Eugene. Somehow, he also found time to serve as a UO Foundation trustee and as Hayward Field’s head judge for the high jump.

With such a rich heritage in Eugene, Jon’s return was never in doubt. He joined Les at Random Lengths in 1974 and took over as president in 1984. As the company flourished, the Andersons began supporting campus projects such as the Moshofsky Sports Center and the Knight Library expansion.

Since 2005, Jon has served as a UO Foundation trustee. Along the way, he has helped lead the drive to build the alumni center, served on the Holden Center advisory board, and funded scholarships.

Now Jon is making a commitment through his estate plan that eventually will increase the Anderson family’s endowment supporting graduate fellowships in journalism ethics. It also will support scholarships in track and field and at the School of Music and Dance.

“It feels rewarding to give,” Jon says. “We’ve got to support the university through philanthropy so it can grow and be the best it can be. It’s up to alumni and friends to make this happen.”