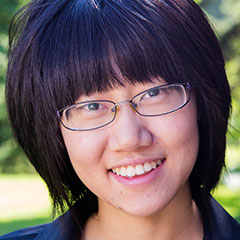 To help pay for her schooling, Fan Zhang of Zibo, China, has juggled three jobs while managing to earn near-perfect grades.

Now, as the UO’s first Cha Scholar, she has enough means to focus her senior year on activities that will prepare her to launch her own company someday.

Fan’s scholarship is funded by a gift from Priscilla and Sunlin Chou of Battle Ground, Washington. The award goes to an international student based on merit and need. Their gift honors Priscilla’s mother, Mrs. Liu Bie Ju Cha.

Priscilla, a software engineer, received a scholarship when she was at UO as an international student. She earned bachelor’s and master’s degrees in mathematics.

Fan, a business major, looks forward to following Priscilla’s example of giving back.

“I want to help students have the energy to focus on academic achievement,” she said.