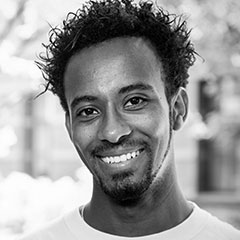 It’s his junior year and Robel Haile is already pursuing advanced medical research that may lead to a better way of screening potential treatments for Alzheimer’s disease.

His story shows how your generosity transforms lives.

Robel grew up in an Ethiopian shantytown knowing that his grandmother had dreamed of sending all her children to college. They were bright and motivated, but there simply wasn’t money.

When Robel came along, his family resolved that things would be different for him. His parents moved to the US when he was twelve, intent on finding work so that he might attend an American university. Robel stayed behind with his grandmother.

When his mom, a nurse’s assistant, and stepdad, a cabdriver, had saved enough to bring him to Portland, Oregon, he enrolled in high school.

He arrived speaking Amharic and very little English. Fortunately, he’s a quick study. He soon mastered English well enough to write poetry as a hobby. He also became intrigued with gene therapy as the result of having a high school mentorship with a specialist in Parkinson’s disease at Oregon Health & Science University.

When it came time for college, several schools offered Robel a full ride.

Thanks to private gifts supporting scholarships, the UO was among them.

Robel said he chose the UO over other offers because a high school science teacher advised him to go where undergraduates have opportunities to do meaningful research.

As soon as he arrived on campus, he volunteered to work in Professor Janis Weeks’ lab. Renowned for her discoveries related to finding better treatments for parasitic infections, she is the first UO scientist to receive a Bill and Melinda Gates Foundation grant for global health research.

“I want to go back and help the people who raised me and helped me go to school,” he said.

“This scholarship gives me the opportunity to become involved in programs that will prepare me for medical school.”