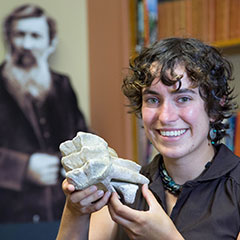 Kyrgyzstan, one of the world’s most earthquake-prone countries, does not have accurate seismic hazard maps. This will change soon, thanks to a UO doctoral student who is using a fossil-dating technique to help create the region’s first seismic hazard maps.

The standard approach for making such maps involves using volcanic ash deposits as the marker for figuring out the age of rock layers crosscut by faults. However, Kyrgyzstan’s volcanoes went extinct about 50 million years ago.

Enter Win McLaughlin, a paleontologist with a new strategy. By identifying fossils in the faults riddling Kyrgyzstan’s rugged terrain, she will be able to determine the age of soils deposited by past earthquakes.

Win’s project, funded by a 2014 Fulbright Fellowship, involves teaching local scientists to excavate fossils and use a technique called biostratigraphy to determine how long ago rock layers were formed. She also will help produce the first published information about Kyrgyzstan’s fossils.

“The research I’m part of will save lives because many of Kyrgyzstan’s population centers sit along major earthquake faults,” she explained. “Most people live in Soviet-era concrete high-rises that are likely to collapse in a major earthquake.”

Win’s novel approach is a great example of the innovative thinking encouraged by UO professors. It’s exactly what Ewart Baldwin, the late UO geology professor known as “Mr. Geology of Oregon,” hoped for when he funded a series of charitable gift annuities to support graduate research awards.

Win perfected her techniques in the process of earning her master’s degree at the UO. Two Baldwin research awards supported that work, which helped open up an exciting new paleontological site in central Oregon.

“They funded everything from paying for gas to drive to my field site at Hawk Rim, to feeding my undergraduate field hands, to lab work like radiometric dating of ash samples,” she said.

“Without scholarships or fellowships, very few of us could do the science we need for our degree requirements or expand our research to involve undergraduate students,” she said. “We make a little go a long way.”