Pat and Susan Coan support Lundquist through their CRT 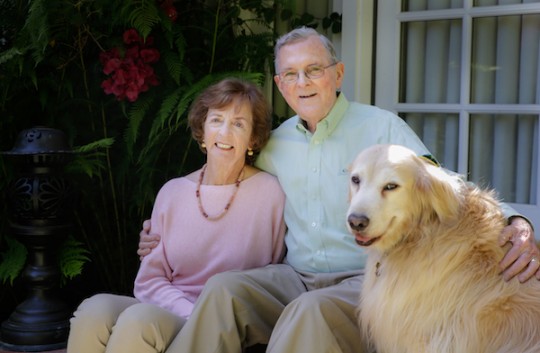 Pat Coan is a real estate investor with the good luck to have launched his first career, in high tech, nearly six decades ago in what would become known as Silicon Valley. Now he and his wife Susan are using an appreciated property to fund a gift for the Charles H. Lundquist College of Business.

Pat earned a degree in economics from UO in 1965, went home to Portland to work, and was accepted by several blue-ribbon MBA programs before choosing to return to UO.

“I was on my own to pay for grad school, and the UO offered me a full-ride scholarship to be a teaching assistant in business law,” he says.

As it turned out, the UO program set up his future career. “We learned how to code in various languages and ran one of the original IBM computers with punch cards,” he says. “My team developed a program for Boise Cascade that actually saved them a lot of money.”

As graduation approached in 1968, Pat met with a campus recruiter from Philco Ford.

“They hired me in project management and finance,” he says of the company, which developed spy satellites, consoles and other electronics for the defense department. He shared an apartment in Mountain View, California, with two UO Sigma Chi fraternity brothers and met Susan LeCocq, a teacher from Yakima, Washington.

They married 50 years ago in July, bought a house, began raising their two children, and started acquiring property. Pat moved first to Memorex, then Raychem before becoming an independent consultant, advising startups and helping companies complete mergers or acquisitions.

But Pat’s heart always stayed in Oregon (even the bags he carries on international trips with Susan have duck luggage tags). He and Susan see their gift as a way to give back.

“This is what I call a triple win,” he says. “We have immediate tax benefits which can be carried forward for another five years, plus life income for the two of us. Best of all, we are able to make a gift that establishes our goal for the business school to have a real estate professorship in the future.”

Pat thinks many can benefit from making gifts of real estate through a charitable remainder trust (CRT).

“It takes time, because there are many steps in the process,” he says. “We had to be patient, but if we had sold this property outright, we would have paid as much as 45 percent in taxes. It feels great to be able to direct it instead to something we are passionate about at UO.”

Real estate of all types can now be transformed into charitable gifts that provide you with tax advantages and life income.