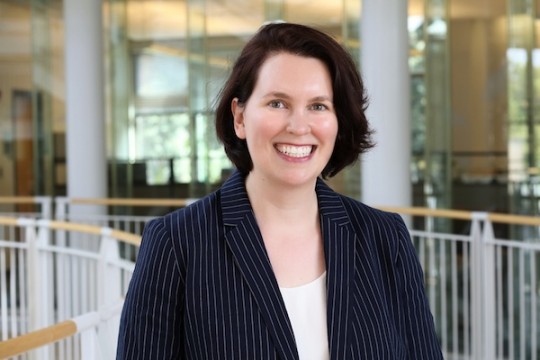 She was a self-described “introverted scientist” known for innovative research at Exxon Mobil, but Christina Calvin’s concern about climate change prompted a mid-career shift that brought her to the UO’s Charles H. Lundquist College of Business.

“I loved what I did, but I am an environmentalist at heart, and I have deep concerns about the next generation,” says the former geologist. “When I was looking at MBA programs, I wanted a sustainability focus.

“What really sold me on Oregon was the business school’s career center. The difference between UO’s approach and every other MBA program I looked at is they asked what I want to do and promised to help me become that.”

Although she did not enter the program expecting to start a renewable energy recycling company, the idea grew out of a “phenomenal” class she took with business instructor Kate Harmon. “I was investigating a problem, and as the project started to gain traction, I realized there really is a hole in the market. I kept trying to find out who is working on this problem, and the answer was nobody.”

She also found a business partner in fellow 2020 MBA grad Mahfuzur Rahman, an international student from Bangladesh. Their company is registered in Oregon, but they are not revealing details as yet since trade secrets are involved.

For Calvin, the deciding factor for choosing Oregon was being offered a scholarship.

“I was coming as an out-of-state student and I was offered a full ride at another institution,” she says. “When Oregon offered me a scholarship, it was an indication they really wanted me.”

She is even more impressed by the people whose endowment gift funded her scholarship, Judy and Roger Shockley MBA ’68.

“Roger and Judith are truly invested in the UO’s program,” she says. “I do not know how to describe it, but all the advice and wisdom that they wanted to share with me mattered. It means something that they actually care about me.”

“My scholarship is enabling the next chapter of my career,” she says. “Thanks to the Shockleys, I can take the risk of opening a business in a pandemic because I do not have college debt. I can follow what I feel is ethically and morally good for the planet.”

Real estate of all types can now be transformed into charitable gifts that provide you with tax advantages and life income.