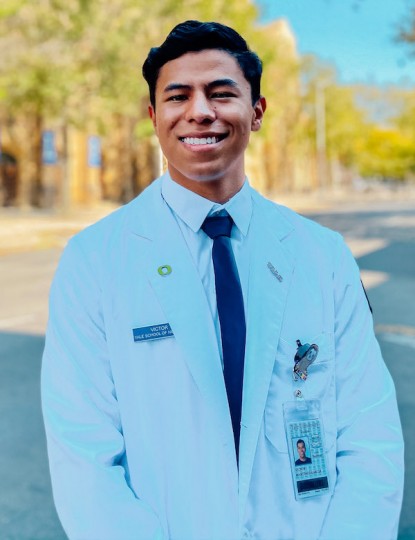 Your gifts help students go further than they dreamed possible

The overwhelming relief that washed over Victor Martinez Garcia after he opened the envelope containing his UO scholarships is familiar to every student whose life is transformed because you made a gift.

“These scholarships allowed me to break the chain of hard manual labor,” said Martinez Garcia, the youngest of seven and the first in his family to go to college.

His journey from a tiny community of farmworkers near Salem, Oregon, to graduate study at Yale was made possible through gifts supporting PathwayOregon and Diversity Excellence Scholarships at the University of Oregon.

An excellent student with a UO degree in human physiology and a minor in biology, he is certain he could not have gone to college at all without that support. Now he looks forward to returning to Oregon as a family nurse practitioner.

“I come from a Latino-majority city with limited access to health care,” he said. “I want to help build a caring and healthy environment for people in my community.”

Martinez Garcia began hoping for a career in medicine after witnessing the care given to a baby cousin, who eventually died due to complications from premature birth.

“I gained such an admiration for health care workers and how they use science for the betterment of people,” he said.

While scholarships opened the way for his success, Martinez Garcia says his undergraduate advisers at the UO were just as vital.

“They encouraged me in so many ways, including the advice to apply to ‘reach’ schools for graduate study,” he said. “Their support is just one example of how my experiences at the UO opened my mind to what could come next and gave me ambition. I learned that I could reach higher, and here I am.”