From receiving as a student to leaving a legacy for others 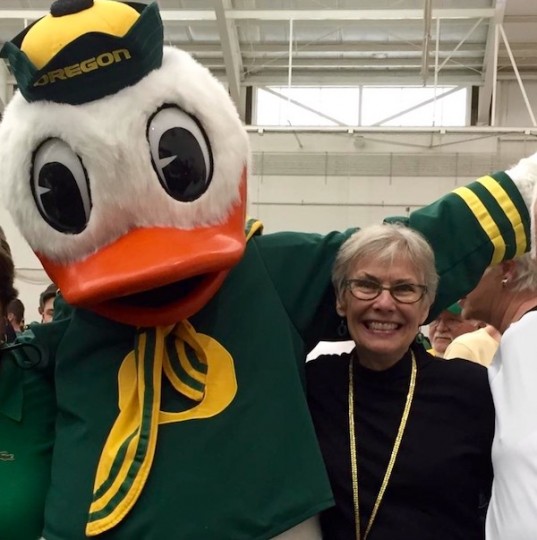 She finished spring term of her freshman year at the UO on academic probation, so Carol Johnson expected the worst when she walked into the dean of women’s office at the beginning of fall term. Instead, she found kindness—and advice that eventually led her to teach at the university level.

The dean suggested she rethink her major and consider becoming a speech and hearing clinician. The field was new and expanding rapidly. Intrigued, she signed up for speech science, got the highest grade in the class on the midterm, and discovered she liked rigorous coursework.

Carol met the love of her life during her senior year, a graduate student in psychology named Dick Yetter. He invited Carol on a date and, soon after, asked her to marry him at the Pi Phi House Dance.

The decades flew by. Children were born; both of whom received their undergraduate degrees from the UO. Dick, the labor compliance officer for the Oregon Department of Transportation, retired first. Carol, a pediatric educational audiologist, retired last year as an adjunct assistant professor at Western Oregon University. When Dick passed away last May, they were just three months short of their 55th wedding anniversary.

Throughout their time together, Carol and Dick’s love story always circled back to its beginnings. They bought season tickets for Autzen Stadium and traveled to every bowl game. Carol served on boards for the College of Education and the alumni association.

They made a habit of giving back over the years, so when Carol decided recently to make a new gift, she knew the UO’s gift planning team could help with the details. She has endowed the Carol Johnson Yetter and Richard Clarke Yetter Hands-On-Learning Fund in the College of Arts and Sciences to help students afford to go on internships and other off-campus experiences.

“I want to provide a legacy, in perpetuity, that honors Dick’s memory and to say thank you to the university that provided such outstanding educations to us and to our children,” she says. “ I hope the gift will help students who need a financial boost to be successful in their chosen fields.”