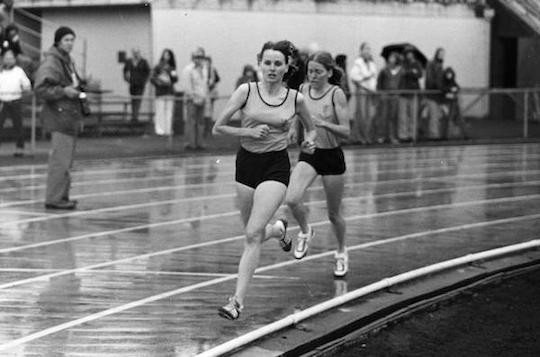 Our mystery photo was identified by none other than Tom Heinonen, the legendary Oregon coach who transformed the school’s women’s track and cross-country programs from infancy into one of the most successful in the history of the sport. He said the front runner is Sandy Trowbridge, BS ’78 and MS ’83 (physical education), and the second runner is Debbie Richie, BA ’81 (marine biology).

Tom identified Hayward field by “that horrible restroom at the south end of the west grandstand behind them” and realized the year must have been 1978, the only year both runners appeared on the all-time letter winners list in track and cross country.

Insider look from Tom: Their uniforms were designed by Bob Ritson, who was Oregon’s head women’s track coach in the spring of 1975 and 1976. The singlets included the image of a running Duck with ponytail and big eyelashes, carrying a baton.