From the Winter 2019 issue of Focus, the UO’s gift planning newsletter 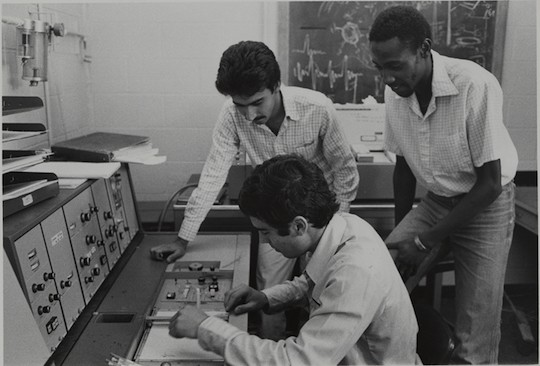 From Neil E. Jacobsen, BS ’72 (chemistry), who retired from the University of Arizona as manager of its Nuclear Magnetic Resonance (NMR) facility:

“That looks like an NMR (Nuclear Magnetic Resonance) spectrometer.  Probably a 60 MHz (maybe model A60) continuous wave electromagnet model.  This would be used for organic synthesis (chemistry) around the late 60s or early 70s.”

“The instrument in the photo is a nuclear magnetic resonance (NMR) spectrometer.  They are used in organic chemistry to determine chemical structure.  Everyone had the first commercial NMR, the Varian A-60.  It had a large water cooled magnet.  I was at UO 1969-70 and 72-75 (drafted).  I served as curator for the A-60 for several years.  It was on the third floor of the Science Bridge just across from the elevator.

The instrument behind the students is an infrared spectrophotometer.  It is used in organic chemistry to determine structure, usually to identify functional groups. The photo appears to be the instrument room with the chemistry majors’ sophomore organic chemistry lab.  When I was a teaching assistant, it was the center lab in the basement of Science II.  It had an instrument room with the IR spectrophotometer.  It appears the T-60 now has been moved there too.

I don’t know the people in the photo.  I would assume a teaching assistant is demonstrating use of the instrument to two students, probably sophomores.  I would guess it’s from around 1980.  But I’m sure if you asked my thesis adviser, Dr. John Keana, he could tell you more.  It was probably taken for use in a yearbook or chemistry brochure.

By the way, NMR in the organic lab is the same technology as the MRI used for medical imaging.   They work by sending radio waves into the specimen or patient in a strong magnetic field.  The medical community changed the name to Magnetic Resonance Imaging to avoid confusion with their Nuclear Medicine departments.

Note there is nothing “nuclear” or radioactive about this technology.  It’s that the nuclei of the some atoms have a magnetic component that lets NMR peek at their environment.”